The intersections between less privileged groups are easy to overlook – but essential to understand in order to develop a clearer picture of equity, diversity, and inclusion.

For example, a person who is both a woman and non-white may experience bias and discrimination relating to each of those characteristics separately, or in combination. Specific issues may also arise only for people who have both of these characteristics.

The Higher Education Statistics Authority of the UK provides staff demographic data for universities across the UK. I was looking at this data with the goal of understanding the relationship between under-represented groups within academic staff and the prestige and size of the institution, when I noticed something that seemed odd.

You might expect that an institution that is more diverse or more inclusive for one group (say, closer to 50% of women in academic roles) might also show greater diversity for other groups (say, a lower proportion of white academic staff who invariably make up the majority). What surprised me was that I actually saw the opposite. For UK institutions in the 2018 HESA statistics, the proportion of women listed as academic staff was  positively correlated with the proportion of white staff. As the chart shows below, universities with more than 50% women on staff were less likely to have racial diversity. 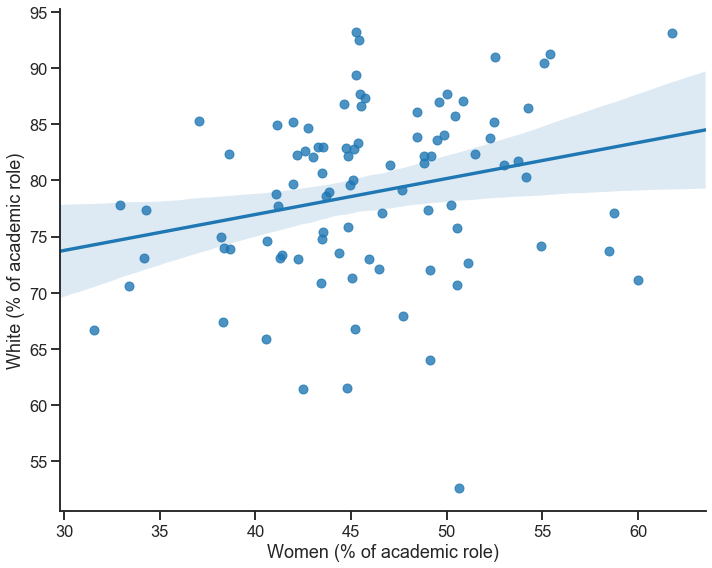 This effect seems to be related to size (and therefore money and prestige). If we look at the number of research outputs as a proxy of resources, then we see that as the number of outputs goes up, both the proportion of academics who are women and the proportion that are white go down. 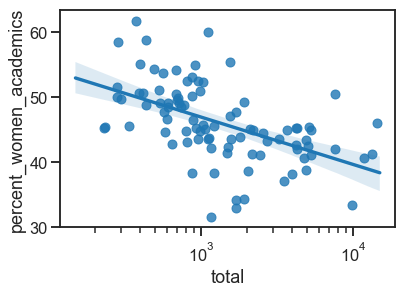 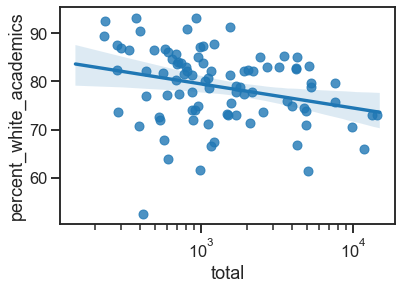 A quick eyeball suggests that there may be an urban vs rural effect in play as well. The big universities in the golden triangle, Manchester and the midlands, tend to have fewer women and also fewer white people. This raises some interesting questions about how prestige, inclusion, and local population effects combine. It might be an expression of a more international makeup for the larger universities, which also have issues with gender diversity. It could also be interesting to look at the intersection of those groups.

We don’t have any simple explanations for this effect, but it points to the complexities of EDI agendas and raises a number of questions about how the current range of interventions are working.

The Race Equality Charter 2014 and Athena Swan Charter for Gender 2005 compete for resourcing and positioning in universities across the UK – an example of intersectionality that can occur when race and gender are regarded as separate issues. The attention of the sector has arguably been much more on gender over over the past decade – but is that at the expense of a focus on race equality.

Furthermore, why are the UK’s largest institutions still performing poorly on gender equity, while apparently doing better on an issue that has arguably received much less attention?